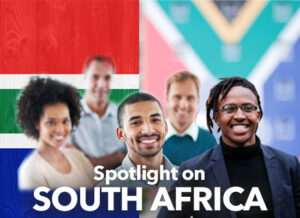 South Africa is a visual feast. One of the most diverse countries in the world, it offers up an extraordinary array of flora, fauna, and geographic features, from the grandeur of the Cape of Good Hope on the southern tip of the continent to game reserves unmatched anywhere on earth. South Africa’s business environment is equally vibrant. The country’s economy is one of the most dynamic in Africa—and it’s the wealthiest on the continent, too. After more than two decades of economic liberalization and integration into the world economy, South Africa is an extremely attractive place to do business. Its workforce is diverse and energetic, with sharp business acumen. Since the end of apartheid, a new South African identity has begun to emerge.

South Africa makes up the southern portion of the continent of Africa, from the Atlantic Ocean in the west to the Indian Ocean in the east. With a total land area of 470,000 miles (1.22 million square kilometers), including the Prince Edward Islands, the country is the twenty-ﬁfth largest in the world, or approximately the same size as France, Spain, and Portugal combined.

To assess the present and forecast the future, we need to start with understanding the past.

While South African society is officially color-free, in practical terms there are many areas of business that are still segregated. Overseas companies looking to break into public-sector contract work would be wise to establish joint ventures with companies owned by Blacks.

South Africa has one of the highest union-membership rates in the world—a total of 3.1 million workers, or 25 percent of the employed workforce. Although the labor movement has a reputation for militancy, strikes are virtually unheard of since the job market has become so tight, and labor relations have generally improved.
Because of the country’s strong union culture, managers tend to be highly sensitive to union concerns in the workplace, and union issues are never far from the surface in decision-making. In fact, unions used rolling mass action to disrupt the apartheid economy, and this weapon is still available.
Knowing how to conduct business in this complex environment is the key to business success, whether learning about meeting formalities or understanding the correct etiquette to use at a braai. Atma Insight’s South Africa Series is a fascinating exploration of South Africa’s culture, people, and modern business environment.

Subscribe today to increase your Global Business & Cross Cultural knowledge and help prepare for the challenges and opportunities ahead with Atma Insights, your professional development resource.