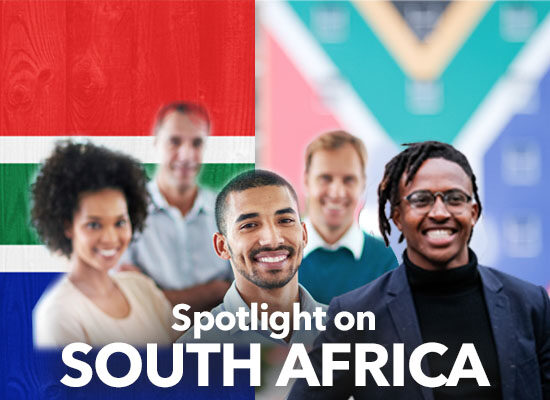 South Africa is a visual feast. One of the most diverse countries in the world, it offers up an extraordinary array of flora, fauna, and geographic features, from the grandeur of the Cape of Good Hope on the southern tip of the continent to game reserves unmatched anywhere on earth. South Africa’s business environment is equally vibrant. The country’s economy is one of the most dynamic in Africa—and it’s the wealthiest on the continent, too. After more than two decades of economic liberalization and integration into the world economy, South Africa is an extremely attractive place to do business. Its workforce is diverse and energetic, with sharp business acumen. Since the end of apartheid, a new South African identity has begun to emerge.

South Africa makes up the southern portion of the continent of Africa, from the Atlantic Ocean in the west to the Indian Ocean in the east. With a total land area of 470,000 miles (1.22 million square kilometers), including the Prince Edward Islands, the country is the twenty-ﬁfth largest in the world, or approximately the same size as France, Spain, and Portugal combined.

To assess the present and forecast the future, we need to start with understanding the past.

Initially a refueling station for Dutch sailors traveling to the East, South Africa gradually developed an agricultural sector based on fruit, wine, and livestock production along the coast of the Cape of Good Hope. All of this changed dramatically with the discovery of minerals in the late nineteenth century. Subsequently, the country emerged as the leading manufacturing and industrial economy on the African continent.
Surging prices for gold and the high demand for base metals and other mineral products propelled the country’s economy after World War II. South Africa was fortunate to have this strong economic base when international sanctions were applied in the 1970s and 1980s.
Nonetheless, import substitution and sanctions-busting were necessary for economic survival, and the country as a whole became increasingly isolated. A handful of massive corporations controlled most of the country’s wealth and provided the majority of goods and services. The national government controlled those sectors of the economy seen as critical to the national interest of the apartheid state, including transportation, telecommunications, and the media. South Africa continues to grapple with the consequences of this economic system even today, with high income inequality and unemployment both remaining significant challenges for the country.
South Africa practiced legal racial segregation under the apartheid system. In the 1970s, worldwide disapproval of apartheid led to economic sanctions against South Africa. An international oil embargo was imposed in 1974, and the country was suspended from participating in the United Nations. Divestment from South Africa was first advocated in the 1960s in protest of South Africa’s system of apartheid but was not implemented on a significant scale until the mid-1980s.
During the 1980s, there was global political and economic isolation. Many global firms pulled out of South Africa as a result of the public outcry and investor pressures against apartheid—a testament to how globalization has empowered not only corporations but consumers, too. The moral arguments against apartheid eventually won, and the disinvestment campaign led to the dismantling of the apartheid system. After F. W. de Klerk was elected president in 1989, change was immediate. Political prisoners were released, and a national debate was initiated on the future of the country. The ban was lifted on the African National Congress (ANC), and in February 1990, Nelson Mandela was released from prison after twenty-seven years behind bars. He was elected president in 1994, and to further unite the country, de Klerk agreed to serve as deputy president in his administration.
Following the 1994 election, South Africa’s period as an international outcast came to a swift end. The country was readmitted into the United Nations and sanctions were lifted. For the first time, South Africans could travel freely, had a free press, and participated in truly democratic institutions. Global businesses could once again do business with South Africa without fear of investor or public backlash.
South Africa has emerged as a free-market economy with an active, vibrant private sector. The country strives to develop a prosperous and balanced regional economy that can compete in global markets. Overall, the country has the most sophisticated market economy on the African continent. Between its economic profile and its well-developed physical infrastructure, South Africa has become an attractive place to do business.
As an emerging-market country, South Africa relies heavily on industrial imports and capital. Specialty minerals and metals, machinery, transport equipment, and chemicals are important import sectors.
Minerals and energy are central to South Africa’s economic activity, and manufacturing, the country’s largest industry, is still based to a large extent on mining. South Africa receives more foreign currency for its gold than for any other single item, although it exports other minerals. 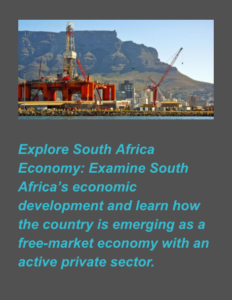 During the years of apartheid, the economy of South Africa stagnated and appeared directionless. That changed after the election of the Government of National Unity in 1994. The post-apartheid government has clear priorities, including economic growth, job creation, and inequality reduction.
Under apartheid, large conglomerates achieved near-cartel status and stifled competition. In many instances, this occurred with tacit government approval, and many promising small companies were bought or forced out of the market by financial muscle. The overall effect was a blunting of innovation and growth throughout the country. Since the end of apartheid, the government has made significant strides in promoting small-business development, in part by offering large corporations incentives to donate funds to small companies.
Nevertheless, there are still significant concerns for those wishing to conduct business in the country. The top five challenges to doing business in South Africa are typically noted as bureaucratic inefficiency, restrictive labor regulations, a shortage of educated workers, political instability, and widespread corruption.
In fact, allegations of widespread corruption brought down the ANC government of Jacob Zuma, who was accused of having a corrupt business relationship with members of the Gupta family in 2018. Corruption is primarily a matter of politics, particularly within the ANC, and there is an informal system of patronage politics that remains pervasive. These structural corruption factors continue to pose challenges for local South Africans, the government, and for businesses operating in the country.
As part of its effort to address these challenges to improve South Africa’s business climate, the government of Cyril Ramaphosa has made a strong commitment to privatization. His predecessor governments oversaw the partial sale of South African Airways and Telkom (the former telecommunications monopoly), as well as other companies. The government is also offering incentives to overseas companies to partner with disadvantaged community-owned South African enterprises and requires businesses with government contracts to make contributions to social programs.
Since the end of apartheid, corporate life in South Africa has changed dramatically. The government is committed to liberalizing the country’s economy in fundamental ways, and corporate culture is changing in response. Programs to encourage economic growth and globalization have attracted new companies from abroad and introduced new approaches to doing business. Companies have also experienced a boost in creative energy. Today, the hallmarks of the South African business culture are change and transformation. 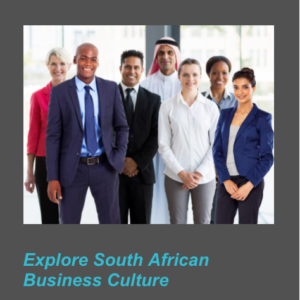 Day to day, doing business in South Africa is relatively easy and is becoming easier as regulations are modified to reflect international norms. At the same time, new policies, particularly in matters of employment and labor, are making business life more complex.

While South African society is officially color-free, in practical terms there are many areas of business that are still segregated. Overseas companies looking to break into public-sector contract work would be wise to establish joint ventures with companies owned by Blacks. 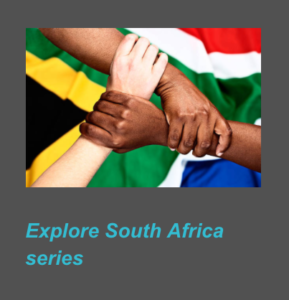 South Africa has one of the highest union-membership rates in the world—a total of 3.1 million workers, or 25 percent of the employed workforce. Although the labor movement has a reputation for militancy, strikes are virtually unheard of since the job market has become so tight, and labor relations have generally improved.
Because of the country’s strong union culture, managers tend to be highly sensitive to union concerns in the workplace, and union issues are never far from the surface in decision-making. In fact, unions used rolling mass action to disrupt the apartheid economy, and this weapon is still available.
Knowing how to conduct business in this complex environment is the key to business success, whether learning about meeting formalities or understanding the correct etiquette to use at a braai. Atma Insight’s South Africa Series is a fascinating exploration of South Africa’s culture, people, and modern business environment.

Subscribe today to increase your Global Business & Cross Cultural knowledge and help prepare for the challenges and opportunities ahead with Atma Insights, your professional development resource.